0
By Diverless Posted on November 30, 2016 in Clever Scientific Monitoring

The Deepwater Horizon oil spill presented an unprecedented threat to the Gulf of Mexico marine resources. It is the largest accidental marine oil spill in history, with almost 5 million barrels spilled. Although the amount of oil gushing to the surface diminished after the well was capped, scientists did not stop gathering data, or looking for ways to avoid future disasters.

Both during and after the oil spill, researchers captured information about the way oil breaks down, dissipates, and bioaccumulates. Their goal: to improve the technology used to mitigate the impact of such disasters.

Oil drifts along the surface of ocean water at 97% of current speed, but only a fraction of the wind speed. Therefore, it is essential to track the water currents, since they account for at least 95-98% of the ultimate oil spill trajectory.

Advisian designed, developed and now deploy Oil Spill Tracking Buoys (OSTBs) to accurately track a surface oil spill, with movement of the buoy limited to the metocean conditions found at the immediate air/sea interface and in the upper 0.5 m of the water column. For fast response, it can be deployed from a helicopter for oil spill response monitoring using satellite tracking modems. The buoy has close to zero windage, yet still sends and receives satellite GPS fixing data.

The main priority in the event of a spill is to accurately track its extent and trajectory to facilitate a rapid clean up. Deploying the OSTB ensures that impact assessment activities and oiled wildlife operations are focused on the correct areas, helping to reduce the overall environmental impact of a spill. Each buoy has its own identification number and can be tracked 24 hours a day, seven days a week. This system allows determination of the exact position of oil, icebergs, and search and rescue teams, to track them in real-time and at any point on the planet.

Every hour saved by not deploying teams to the wrong area to clean the spill is a high risk or impact hour saved. During the Deep Water Response effort, the Macondo Oil Field had 1500 vessels, 830 skimmers and 3.47 million feet of boom. 50% of this clean-up effort was in the wrong area due to the tracking buoys not tracking the oil appropriately. As such, if each vessel had 5 crew on board for a standard working day, then approximately 5750 high-risk man hours could have been eliminated each day if they were directed to the correct place.

Previous project experience, examination of existing oil spill response systems and model validation exercises have shown that multiple OSTBs need to be deployed across a variety of locations during an oil spill incident, namely spill fronts and spill central points. This is vitally important for any Oil Spill Response Team for planning its incident response effectively, and to enable the emergency numerical modelling systems that predict the fate of a spill. 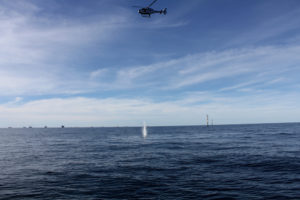 The Potential for Subsea Mining in New Zealand